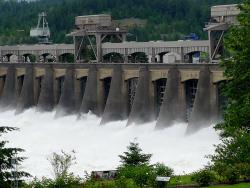 The Bonneville Dam, Columbia River Power and Navigation System consists of 55 major projects on Oregon's Columbia River and is said to be the largest hydroelectric system in the world.

The Columbia River forms part of the border between Washington and Oregon and flows inland through the only waterway that crosses the Cascade Mountains. To harness the energy of the ninth longest river in North America, engineers developed unique design and construction approaches to overcome problems caused by depth of water, current velocity, and an irregularly-shaped river bottom.

Among the special techniques was the development of horseshoe-shaped timber cribs used as cofferdams which were fit into the irregular river bottom. This eliminated the costly and time-consuming task of leveling the river bottom. The cribs diverted the river during construction.