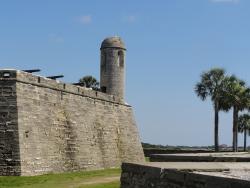 The fort was constructed of coquina rock. Unique to Florida, the rock consists of millions of seashells cemented together. It proved highly durable and easily absorbed the force of many cannon balls.

The Castillo de San Marcos was the first permanent European settlement in the continental United States. Originally an outpost of the Spanish Empire, it is the oldest major engineered structure existing in America.

In 1668, pirates attacked the colony of St. Augustine and the Spanish residents were nearly overtaken. In response, Queen Mariana of Spain ordered that a fort be built to defend the colony and to protect Spanish ships.

Over the years, the distinctive star-shaped fort and surrounding moat have served several countries. During the 18th century, the British gained control of the Castillo, but the Spaniards eventually took it back. They remained in control of the fort until the United States purchased Florida in 1821. The Castillo housed confederate troops during the Civil War and served as a military prison during the Spanish-American War. In the 1830s, it was renamed Fort Marion in honor of General Francis Marion, a Revolutionary War hero.