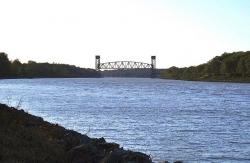 The Chesapeake & Delaware Canal is the only canal built in 19th-century America that still operates today as a major shipping route. Connecting the Port of Baltimore and Upper Chesapeake Bay with the mouth of the Delaware River and the Port of Philadelphia, the canal was one of the first civil engineering projects proposed in the New World and one of the most difficult to carry out. Although only 14 miles long, the canal's original cost made it one of the most expensive canals ever built in America.

The main reason for the canal's great expense was the cost of excavating a three-mile section known as the "Deep Cut," a portion of the channel that crossed a low ridge of the Maryland-Delaware peninsula and cut through terrain composed mainly of boulders, gravel, sand, clay, and water. Once completed, however, the Chesapeake & Delaware Canal proved to be of great value to the shipping industry in shortening the trip from Baltimore to Philadelphia by nearly 500 miles.