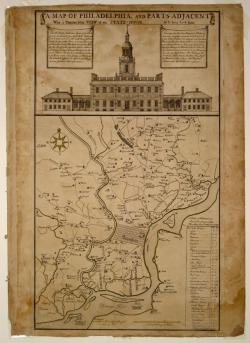 The City Plan of Philadelphia is a seminal creation in American city planning in that it was the first American City Plan to provide open public squares for the free enjoyment of the community and a gridiron street pattern featuring streets of varying widths: wide main streets and narrower side streets. In addition this plan was the first city plan in the United States to provide for long-term urban growth. These features inspired the planners of many cities to adopt the Philadelphia Plan as a model.

The City of Philadelphia was founded by William Penn as the Capitol of the Province of Pennsylvania. He determined that the city should be place upon the river for health purposes and easy navigation. Penn also specified that the roads and highways should be laid out first and then the lots for purchase. Thus, ensuring that they be convenient and not encroached on by builders. In the end, Penn directed that the city should extend in length from the Schuykill River to the Delaware River (approximately two miles) and about one mile in width. Thomas Holme was the Surveyor-General of the Province and city planner. He published the engraving of the city plan in London in 1683 to advertise for new emigrants to settle there.

The key features of the Plan were:

The open public squares are the most striking feature of the city plan. While the gridiron street plan had been used in the American colonies as early as 1638 in New haven, the only public squares provided in earlier colonial plans were for the express use of civic buildings and markets. William Penn specified that the Philadelphia squares, other than the Center Square, were to remain open for the recreation of the residents. The four public squares, situated in each quarter of the original grid pattern, have evolved with the neighborhoods which surround them.