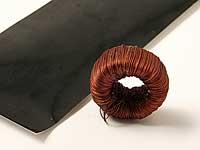 Society
IEEE
Main Category
Electric
Era
1930-1939
Date Created
1930-1945
Location Country
us
Coordinates
35.514343, 139.486427
Address1
Tokyo Institute of Technology
City
Nikaho
Country
Japan
Website
http://www.ieeeghn.org/wiki/index.php/Milestones:Development_of_Ferrite_Materia…
Creator
Takei, Takeshi
Dr. Takeshi Takei, the professor at the Tokyo Institute of Technology, discovered that composite oxides containing zinc and iron have distinguished magnetic properties. In 1930, Prof. Takei submitted a paper on his work to Japanese Electro-chemical Society and also presented a paper at 57th General Meeting of American Electrochemical Society in St. Louis. That same year, Prof. Takei applied a patent for his discovery, which was granted in 1932(Japan PAT-98844). Tokyo Denki Kagaku Kogyo (now TDK Corporation) was founded in 1935 to commercialize this newly invented ferrite cores. The collaborative work of Tokyo Institute of Technology and TDK led to the development of Cu-Zn ferrite well suited to practical applications in high-frequency ranges up to 1.2MHz. TDK started mass production of ferrite cores in 1937 under the product name of “Oxide Core”. Most of the shipped products were used in the local oscillators, mixers, and intermediate frequency transformers of military radios. These are the world first usage of ferrite to radio communication equipments. Ferrite largely contributed to reduce volume and weight of radio receiver compared with air coil. Until the end of the World War II, TDK was the only company who could supply ferrite cores, and shipped a cumulative total of nearly 5 million pieces of ferrite cores. Today, around 400 thousand tons of ferrite cores are still produced per year, reflecting the critical role that this material continues to play in the electrical and electronics fields. The achievements highlighted in this proposal were critical to the commercialization of ferrite, and contributed heavily to the rapid expansion in the ferrite industry that was to come later.
Tags
Radio
World War II
Ferrite
Antennae
Tokyo
Image Credit
Courtesy Tokyo Institute of Technology
Image Caption
A replica of the early soft-ferrite core.