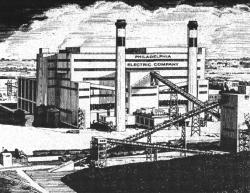 Operated by the Philadelphia Electric Company (PECO), now known as Exelon Corp., Eddystone Station Unit #1 is a 325 MW pulverized-coal-fired plant that pushed the technology of steam-electric generating plants. When built in 1960, engineers sought to make a more efficient plant using higher temperatures and pressures and larger machines. Previous experience at Philo 6 (Zanesville, Ohio, 1957) had demonstrated supercritical steam plants would work, so engineers pushed beyond that frontier to even larger machines and efficiencies. They succeeded, but also discovered a more economically viable generating plant design if pressure and temperature conditions were reduced slightly—and that is how supercritical plants are built today.

Many innovations were implemented along with more widespread application of proven concepts. The steam generator and steam turbine were first-time designs, and the ground covered was new: For example, the steam tables had to be extended into the supercriticial pressure region to develop the design information required for equipment design and sizing. During this phase, the supercritical steam vapor behaved more like a liquid than a vapor, in regard to heat transfer properties. The design phase developed a once-through boiler (no mud drum) that required ultra-pure water, which extracted molecules directly from the metals that it contacted. The turbine design feature new high-speed control valves, unique shaft and inlet seals, and many other innovations. The station also required creep rules to be extrapolated from known values, which proved highly accurate.