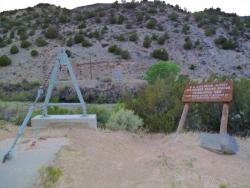 A tiny village on the Rio Grande River in northern New Mexico became the training center for the first American hydrographers and provided the first stream-gauging operations of the U.S. Geological Survey. To plan any water system, it is necessary to know the amount of water flowing in the stream or river at all times - including low, normal, and flood conditions.

To create streamflow measurement techniques, engineers designed gauging equipment and brought hydrographers to Embudo to learn to use these tools.   The activities performed at Embudo led to the gauging of many of the nation's waterways, providing nationally consistent, prescribed standards for the  scientific evaluation of surface-water resources and crucial data for land use and urban planning decisions.