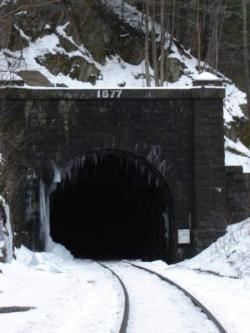 When first proposed in 1819, the Hoosac Tunnel seemed so logical. It would provide an efficient and direct route for the Boston and Albany Railroad, whose pathway meandered 20 miles along precipitous grades. Early proponents, however, could not have imagined that blasting a 4.75 mile tunnel through the Hoosac Mountain would require over 20 years of labor. The project took so long to complete that it was commonly referred to as "The Great Bore."

Work began in the 1850s, but financial troubles put the project on hold. By 1863, the state legislature took over the tunnel, but political issues, tunneling accidents, and drilling obstacles plagued the process. By 1868, only one-third of the tunnel had been excavated, so legislators sought private contractors to complete the job. They awarded the work to two highly regarded Canadian civil engineers, Walter and Francis Shanley. They quickly reorganized the work and introduced several innovations that allowed them to finally complete the work and, at the same time, significantly transform hard-rock tunneling techniques.