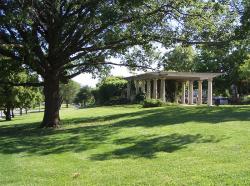 "Who in Europe, or in America for that matter, knows that Kansas City is one of the loveliest cities on earth? [...] the residential section is a masterpiece of city planning [...]; Few cities have been built with so much regard for beauty."
- Andre Maurois, French author and lecturer

Known for blues and barbecue, Kansas City also ranks as one of the most creatively planned cities in the world. Engineer and landscape architect George Kessler leveraged the city's varied topography to design a system of stately parks and boulevards that became a blueprint for the city's growth.

Kessler was an urban planning pioneer who understood how quality design could influence the city's commerce, culture, and social structure. In the absence of effective zoning, he used landscaping to divide residential, commercial, and industrial districts. The plan discouraged congestion, eliminated blighted areas of the city, and sited recreational facilities in walking distance of neighborhoods.

Kessler's plan included some of the first specifications for pavements, gutters, curbs, and walks. Other engineering advances included retaining walls, earth dams, subsurface drains, and an impoundment lake - all part of Kansas City's legacy that has influenced urban planning in cities throughout North America.