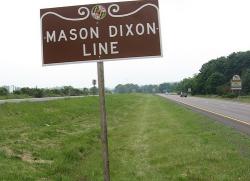 The granite milestones marking the Mason-Dixon Line bear crests from the two parties involved in the land-grant dispute, the families of William Penn and Charles Calvert (also known as Lord Baltimore).

What is now generally referred to as the Mason-Dixon Line was established by the Missouri Compromise of 1820 as a demarcation between slave and free territories. But that important geographic border took its name from a previous Mason-Dixon Line; one established more than 50 years earlier to formally separate Maryland from Pennsylvania and Delaware. The two Englishmen for whom the line is named accomplished one of the greatest surveying achievements of early America.

Charles Mason and Jeremiah Dixon were both assistants to astronomer James Bradley at the Royal Conservatory at Greenwich. They were brought to America to settle a border dispute between the inheritors of the land grants establishing Maryland and Pennsylvania. Taking into account the curvature of the earth, the pair carried out extremely precise measurements using astronomical tables and angles based on circular arcs. Their method quickly became the basis for establishing other town and state boundaries, as well as the U.S.-Canada border.