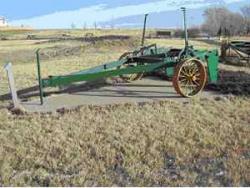 In the 1930's thousands of acres of land were rendered unproductive through wind erosion because of drought, tillage, and dust mulch farming practices. Charles S. Noble, of Nobleford, Alberta, invented a cultivator that sheared stubble and weeds below the ground surface, leaving residue on the soil to reduce evaporation and prevent erosion by strong Alberta winds. The Noble Blade Cultivator was patented in 1937. The Noble family subsequently developed a variety of straight and V-blade cultivators. By 1979, more than 10,000 Noble cultivators had been built for use in western Canada, USA, Australia, Russia and India. "It is the next generation that pays for the sins of careless and greedy soil management. The man who would earn the full respect of his son should make sure the young man inherits the soil as well as the farm." C. S. Noble