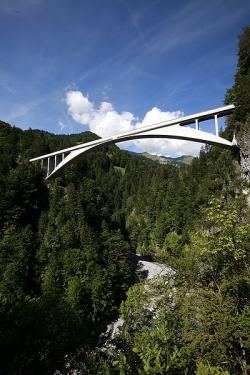 Maillart's 1901 invention of the concrete hollow box design became a major bridge building concept. In this design, the concrete arch ring and the concrete deck are joined by longitudinal concrete sidewalls, giving the structure the cross-section of a hollow box. The bridge includes reinforcement in both the spandrel (pillar) walls and the arch to control cracking. The rocky walls of the ravine provide the arch support, obviating the need for stone abutments.

Maillart's design ran contrary to the prevailing view that bridges should be massive. He believed massive structures would more easily crack and shrink from temperature fluctuations. He also believed in using the best materials, but using them sparingly. This bridge underscores his view, providing the lowest cost of 19 designs submitted for the bridge's original design competition.