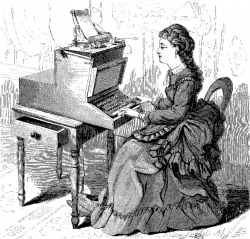 Designed in 1873 by Christopher Latham Sholes, with Carlos Glidden, Samuel Soulé and Mathias Schwalbach, the Sholes & Glidden 'Type Writer' was the first commercially successful device that rapidly printed alphanumeric characters on paper in any order.

Manufactured by E. Remington and Sons, the Sholes & Glidden incorporated designs that were found in models created by earlier inventors. However, the arrangement of the keys was a feature that had not been present in previous models. This model employed a lever-action key mechanism, inked ribbon, and cylindral, shifting platen. It also incorporated the 'QWERTY' keyboard layout, which minimized sticking keys.

As one historian noted at the time, "perhaps one of the greatest or even the greatest achievement of the typewriter is the transformation it wrought in the social order. " The 'Type Writer' created a demand for typists that enabled women to enter the business world in unprecedented numbers.