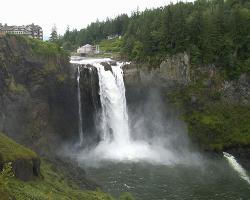 This was one of the first power facilities to demonstrate the feasibility of long distance electric power transmission. Through an elaborate switchboard at the main station, tied to similar boards at substations, a complete circuit was created to drive an electric motor 153 miles from the generator a remarkable distance at that time.

The Pacific northwest has many hydroelectric power generating facilities, but few can hold a candle to the Puget Sound Power and Light Company facility at Snoqualmie Falls. It is significant not only because it is a very early example of hydroelectric generation, but also because much of the original equipment is still in use today.

Construction of the cavity plant began in 1898 under the guidance of William T. Baker, who purchased the property the previous year. His desire to erect a facility 250 feet below the surface of the Snoqualmie River, in a dense strata of rock, was prompted by the excellent head of water, rising 270 feet high with an available energy of 30,000 to 100,000 horsepower.

The generating plant originally served the 120,000 residents of Seattle and Tacoma, about 30 and 35 miles to the west and southwest, respectively. It remains active today, providing power to communities in the Puget Sound basin.