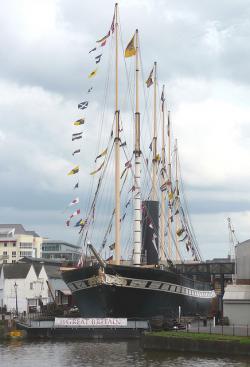 The innovative SS Great Britain, launched in 1843, was the first iron-hulled, screw-propelled ship to cross any ocean and led mercantile history into British domination in the late nineteenth century. Standard practice of naval and merchant ship construction derived from this ship. The compartmented hull, unprecedented 1,500-horsepower engine with chain drive, and many other seminal features were the designs of Isambard Kingdom Brunel. New design features included a balanced rudder, an electric log, a double bottom, and water-tight bulkheads.

Launched July 19, 1843, the ship's first voyage to New York in 1845 began a career as a passenger and later cargo vessel. Finally retired from the seas, the sturdy hull survived eighty-four years in the Falklands to allow return to the dock of origin in Bristol 127 years after launch.