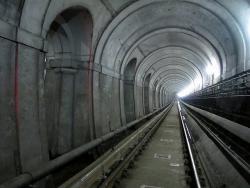 But in 1818, Marc Isambard Brunel patented a revolutionary new tunneling device: a special rectangular, cast-iron shield that supported the earth while miners dug it away in small increments. Bricklayers would follow the shield, building a twin-arch brick tunnel lining as they went. Investors formed a new company to back the tunnel, and Brunel, with the assistance of his 20-year-old son Isambard Kingdom Brunel, eventually succeeded in building the Thames Tunnel.

Tags
Thames
Tunnel
Brunel
Thames River
Rotherhithe
Wapping
Tunnelling Shield
Tunnelling Shield
"...there is no work upon which the public interest of foreign nations had been more excited than it has been upon this Tunnel. Men cannot but see great political, military as well as commercial profit that will be derived..."
- Duke of Wellington, 1828
Image Credit
Courtesy Flickr/Annie Mole (CC BY 2.0)
Image Caption
Thames Tunnel