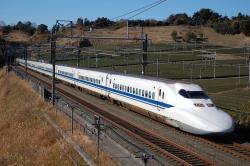 The Shinkansen can be summed up as an inter-city passenger transportation system that has been developed by constantly seeking to expand the limits of the special advantages of railways, including safety, reliability, high speed, and large transportation capacity. The success of Japan's Shinkansen has led to the reevaluation of railways round the world, and a number of nations are now operating and planning high-speed railways based on concepts similar to that of the Shinkansen.