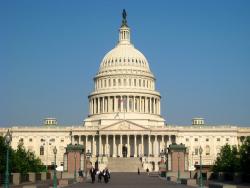 The United States Capitol is among the most symbolically important and architecturally impressive buildings in the nation. Construction of the original Capitol began in 1793, but it has been through several additions and alterations. Over its lifetime, the Capitol building has been built, burnt, rebuilt, extended, and restored.

The building was considered the most important American construction project of its time. Several innovative engineering techniques were employed, particularly once Benjamin Latrobe was appointed Architect of the Capitol in 1803. His plan revisions included vaulting the ceilings of the north and south wings to provide support for future building additions.