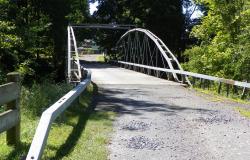 The Whipple Bowstring Truss Bridge was built from a design patented in 1841 by Squire Whipple. Whipple was the first person to understand the stresses in truss members and he developed the first theoretical formula to calculate stresses in the articulated truss. His bowstring truss was the first to use cast iron for compression and wrought iron for tension membranes.

The structure originally crossed the Cayadutta Creek in Johnstown, New York.  It is one of five truss bridges built by Whipple in eastern New York and it is possibly the oldest. The City of Johnstown donated the bridge to Whipple's alma mater, Union College, in 1979.

Though the design and details of the bridge were patented, Whipple never was able to collect royalties. The State of New York adopted "Whipple's Patent Iron Arch Truss Bridge" as the standard for its canals but evaded royalty payments by declaring that the erection of the bridges was "for the public good."