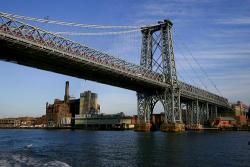 The Williamsburg Bridge originally carried four trolley lines, two elevated rail lines, four carriage lanes and two pedestrian walkways, making it amongst the most heavily loaded bridges ever built. The bridge superstructure was stiffened by two parallel trusses each 40 feet deep and hinged at the main towers.  The Williamsburg Bridge was the last major suspension bridge designed using the "elastic theory," and its exceptionally deep truss is a result of the approximations included in this theory. Substantial increases in suspension bridge spans would not be possible until the application of the "deflection theory" - first used on the nearby Manhattan Bridge.

Primarily the work of Chief Engineer L. L. Buck, the structural design of the Williamsburg Bridge included contributions from R. S. Buck, O. F. Nichols and H. D. Robinson - all leading bridge engineers of the late 19th and early 20th centuries. The architect Henry Hornbostel also contributed to the design of the bridge.