In an era when roads and canals were the most common means of overland transportation, the Allegheny Portage Railroad provided a novel alternative. The railway carried fully-loaded canal boats over the steep grades of the Allegheny Mountain. The 36-mile system rose almost 2,300 feet above sea level at its summit - the highest level to which canal boats had ever been carried. The project included ten double-tracked inclined planes, powered by steam engines. Its 900-foot Staple Bend Tunnel, cut from solid rock, was the first railroad tunnel constructed in America. Although the railroad lasted just 21 years, it replaced pack horse trails and wagon roads, substantially reducing the time and cost of crossing the Allegheny Mountain. Facts 1. Sixty-eight culverts, spanning three to 25 feet, were built of stone laid in lime mortar. Faces of walls at the end of each culvert were built of hammered stone. 2. The double-gauge tracks were 4 by 8.5 feet long, composed of flat iron bars spiked to timber rails laid on stone block sleepers. 3. Water was supplied to the steam engines by thousands of feet of wood and lead pipes from local wells and cisterns. 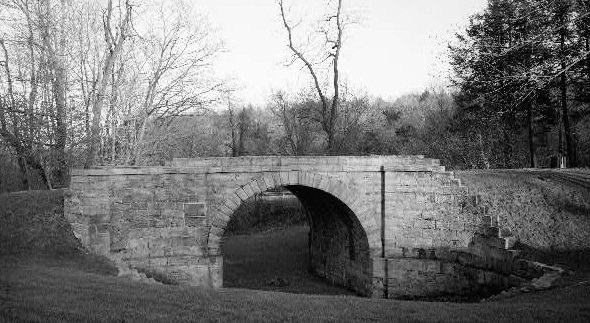