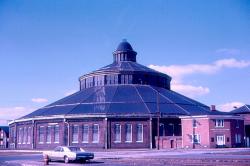 "The roundhouse is an amazing survivor of an important era in American engineering and architectural history. Eric DeLony, chief of the National Park Service's Historic American Engineering Record, has called it 'the most important surviving cast-iron framed building in North America.'"
From: The Baltimore and Ohio Railroad Martinsburg Shop Complex: Historic Structure Report. By John P. Hankey, August, 2000.

The Baltimore and Ohio Railroad Roundhouse and Shop Complex contains some of the most significant surviving mid-nineteenth century structures in the United States. The complex is an authentic and complete artifact of the American Industrial Revolution. The site and structures - by virtue of their authenticity, scale, completeness, and design - offer a firsthand experience of historic mid-19th century architectural industrial space. The significance of these structures lies both with what they are and how they came about. Each building in the complex incorporates novel and sophisticated engineering solutions within a carefully presented architectural statement. While some of these points may seem subtle, they have quietly served their builders for over 120 years and hidden their significance beneath prosaic functions.

The Roundhouse is the sole surviving cast-iron framed roundhouse and is an important example of mid-19th century industrial building design. Designed by Albert Fink, in collaboration with Benjamin H. Latrobe, it represents an early use of standardized, prefabricated iron structural elements to create an efficient and fire-resistant building.

The Martinsburg Machine and the Frog Shops, while conventional in their construction, are typical of the level of sophistication of many industrial buildings at that time. Both structures used heavy trusses to help support the second floors. This helped to keep the first floor free of obstruction from columns yielding a comparatively large enclosed area. For mid-century rural America, the ability to a have large enclosed space unencumbered with load-bearing columns was an awe-inspiring sight.