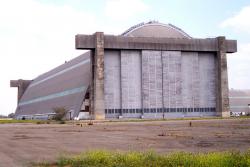 All building materials were made fire-resistant to protect against incendiary bombing. Treatment involved a vacuum process of salt impregnation. During construction, high winds caused a partial collapse of some members. The ruined materials were piled for incineration, but would not burn; so the rubble was buried on site. Years later, a farmer leasing ground on the site plowed up some of the materials. They were reported to still be in good condition.

At the time of their construction, the twin U.S. Marine Corps blimp hangars were the world's largest buildings of timber construction and were believed to provide the largest covered open space between supports of any building in the world. Each building required over 3,000,000 f.b.m. of lumber. Normally, steel would have been used for framing; but the demand for steel for ships and other military objects superceded the facility's construction needs. Each hangar was capable of housing six lighter-than-air craft .

The hangars provided shelter and repair for blimps that patrolled the Pacific Coast during World War II. This helped ensure safe seas for U.S. ships throughout the war. The hangars are over 1,000 feet long with a ceiling height of 178 feet. Clear area covers nearly five and one-half acres. The doors are composed of six leaves, weighing 26 to 29 tons each.