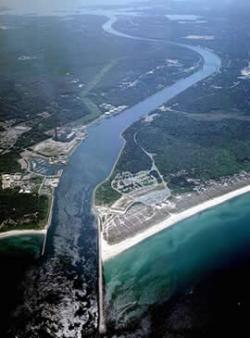 The idea of a canal eliminating the costly and dangerous sea trip around the Massachusetts peninsula of Cape Cod was envisioned as early as 1623 by Pilgrim leader Miles Standish. It was not until financier August Belmont became involved in 1906, however, that sufficient funds for the project could be raised. Belmont had been the primary backer of New York City's first subway, and chose the subway's chief engineer, William Barclay Parsons, as the canal's project director.

In 1905, Parsons had sided with the majority of the Panama Canal commission in recommending that "The Big Ditch" be built as a sea-level canal without locks. He and the other commissioners eventually were overruled.  With the Cape Cod Canal, however, Parsons proved that a 17.5-mile, sea-level canal without locks could accommodate a difference in tides at each end of almost three hours and nearly five feet. Originally 480 feet wide and 34 feet deep, the canal was enlarged in 1940, making it the widest canal in the world.