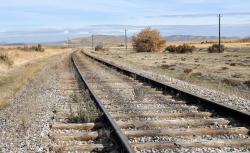 Central Pacific Railroad served as the Western terminus of America's first transcontinental railroad, passing through the formidable Sierra Nevada Mountains. In all, 15 tunnels were blasted through solid granite.

Thousands of Chinese from Kwantung Province were recruited by Central Pacific Railroad Company and became known for their diligence and hard work. In the second year of construction, nine out of ten workers on the CPRR were Chinese.

At one point, 4,000 laborers worked in shifts to keep construction moving 24 hours a day for 12 straight days on a single five-mile stretch. Most stretches were on curves; but where sections were joined, they were never more than an inch off line, showing the accuracy of calculations and surveying under such difficult circumstances. The Summit Tunnel was 7,042 feet above sea level, the highest point of the rail line. When the headings driven from the two ends met, they were off by only two inches, a feat that could hardly be equaled in the 21st century.