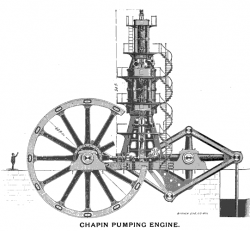 Society
ASME
Main Category
Mechanical
Sub Category
Pumping
Era
1890-1899
Date Created
1893
Location Country
us
Coordinates
45.820358, -88.063746
Address1
300 East Ludington Street
City
Iron Mountain
State
MI
Country
USA
Zip
49801
Website
http://www.asme.org/about-asme/history/landmarks/topics-m-z/pumping/-124-chapin…
Creator
Edward P. Allis Company
Reynolds, Edwin
As one of the large strikes in the Lake Superior geological district, the Chapin Mine was located under a cedar swamp and unminable until it was drained by one of the largest pumping engines of the 1880s. Miners at the Chapin Mine, which began producing ore in 1880, soon tried to sink a deep shaft through 90 feet of quicksand, using enormous pumps driven by compressed air. The sand was frozen using two of the largest refrigeration compressors built, and a sectional cast-iron circular shell lined the D shaft. Mining continued for ten years using conventional pumps to dewater the lower levels. As the problem grew in severity, Edward P. Allis Company of Milwaukee was contracted to build the gigantic pumping engine that is now designated a landmark, which began operating in 1893. The Chapin Mine pumping engine is a steeple compound condensing engine capable of lifting 200 tons of water a minute, equivalent to 4 million gallons a day. The engine is fitted with a surface condenser and a Reynolds patent air pump. Mine water was used in the condenser for cooling purposes. Edwin Reynolds and his nephew, Irving, designed the steam-driven pumping engine, which drew worldwide attention as the largest U.S. pumping engine and the efficiency it achieved. The mine was drained and operations continued until 1930, when the mine was allowed to fill with water. The D shaft was pumped to a depth of 600 feet, before the pumping engine was moved to the C shaft that had been abandoned in 1891 when the mine, called the Ludington Mine, was drowned out. The Chapin pumping engine pumped to a depth 1,513 feet at the C shaft, beginning some time before 1900 and until operations were suspended in 1932
Tags
Chapin Mine
Pump Engine
Lake Superior
Geological
Cedar Swamp
Refrigeration
Quicksand
Condenser
Reynolds Air Pump
Ludington Mine
Ludington Mine
Image Credit
Public Domain; Produced prior to 1/1/1923
Image Caption
Chapin Mine Pump