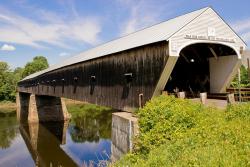 The Cornish-Windsor Covered Bridge is the longest wooden bridge in the United States and the longest two-span, covered bridge in the world. It is also a classic example of wooden bridge-building in 19th-century America. With copious supplies of timber at hand and a generous reserve of carpentry skills available, bridge builders in early America quickly discarded the masonry arches prevalent in the Old World. Instead, they opted for a revival of timber-truss designs dating from 14th century Europe.

Based on a design patented by architect Ithiel Town in 1820, the Cornish-Windsor Bridge represents the first major step in the evolution of American wooden bridges. With load-bearing joints fastened together by wooden pegs, Town's design uses a lattice  pattern that allows the load of the bridge to be distributed more evenly. Extending 460 feet across the Connecticut River and in regular use today, the Cornish-Windsor bridge continues to stand as a model of the economy and resilience of early American design.

Tags
Cornish
Windsor
Ithiel Town
Covered
Bridge
Wooden
Lattice
Connecticut
Connecticut
"(W)e got about as far as the center of the western span when the bridge floor began to tremble strongly in keeping with the footfalls of a driving horse approaching us in the other span .... This was my only encounter with the sympathetic vibration once so destructive to the joints of bridges."
- Edwin A. Battison, Curator of Civil Engineering, Smithsonian Institution, 1970
Image Credit
Courtesy Flickr/aussiegtl (CC BY 2.0)
Image Caption
Cornish - Windsor Covered Bridge