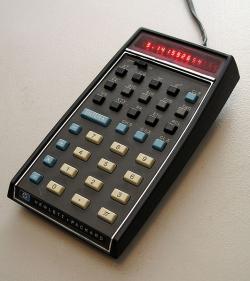 Society
IEEE
Main Category
Electric
Date Created
1972
Location Country
us
Coordinates
37.412403, -122.1484
Address1
Hewlett-Packard Company
Address2
1501 Pagemill Road
City
Palo Alto
State
CA
Country
USA
Zip
94304
Website
http://www.ieeeghn.org/wiki/index.php/Milestones:Development_of_the_HP-35,_the_…
Creator
Hewlett-Packard Company
The HP-35 was the first handheld calculator to perform transcendental functions (such as trigonometric, logarithmic and exponential functions). Most contemporary calculators could only perform the four basic operations – addition, subtraction, multiplication, and division. The HP-35 and subsequent models have replaced the slide rule, used by generations of engineers and scientists. The HP-35 performed all the functions of the slide rule to ten-digit precision over a full two-hundred-decade range. Developed by Hewlett-Packard Company in Palo Alto, California at 1501 Pagemill Road and introduced in 1972, the HP-35 was the first full-function, shirt-pocket-sized, scientific calculator. This invention revolutionized the profession by allowing the engineer to make almost instantaneous, extremely accurate scientific calculations, at his home, office or in the field. Three to five hours of continuous use could be expected from a fully charged battery pack. Although semiconductor density was increasing yearly, bipolar technology was never going to be suitable, too power hungry and not small enough. Metal Oxide Semiconductor (MOS) promised high density and low power but was still in its infancy. However this didn’t stop Bill Hewlett from getting the Industrial Design group of HP Labs to mock up some ideas of shape, key layout, etc. The solid state laboratory was also working on LED displays with molded encapsulated lenses for magnification driven by low power bipolar driver circuits. By 1970 a PMOS architecture looked promising as a candidate for scientific algorithms; a binary coded decimal (BCD) adder and 13 digit plus sign (56 bit) long multiple words in a serial circulating shift register (race track) arrangement that was very efficient of both chip size and power. The microcode word length was 11 bits; during final development shortened to 10 by having only an inferred conditional branch, a ten percent reduction in circuitry was significant at the time. The fourteen digits would just be sufficient for ten digit accuracy with an overflow or carry digit and two guard digits while still retaining sign information throughout the algorithmic iterations. The result could be displayed as either a signed mantissa and two signed exponent digits or variable length fixed point. The product had an arithmetic and register chip, control and timing circuit and several ROMs. A clock rate of 200 KHz was sufficiently high to calculate a transcendental function within a second. The ubiquitous slide-rule was obsolete within a year; the HP-35 could do all the functions of the slide-rule to ten digit precision and determine the decimal point or power of 10 exponent through a full two hundred decade range. Hewlett-Packard Co. (Palo Alto, Calif.) received the IEEE Corporate Innovation Recognition honor in June 1989 for "the creation, development and introduction of the first full-function, shirt-pocket-sized, scientific calculator"- the HP-35.
Tags
Hewlett-Packard
Palo Alto
Scientific Calculator
Semiconductor
Logarithm
Exponent
Trigonometry
Image Credit
Courtesy Wikipedia
Image Caption
The HP-35 was the innovative culmination of mechanical design, state-of-the-art technology, algorithm development and application; all unique at the time.