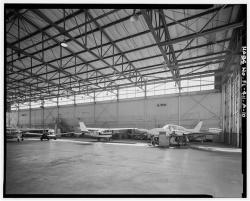 Established in 1935 as the Valparaiso Bombing and Gunnery Base, the base supported the U.S. Army Air Corps, the predecessor to the U.S. Air Force, as its primary facility for training new pilots in bombing and gunnery tactics. It also served as a test facility for aircraft, aircraft armament, air-delivered munitions and other aircraft systems. The base was renamed Eglin Field in 1937 in honor of Air Corps aviator Lt. Col. Frederick I. Eglin, who trained pilots during World War I, and who had recently died in an aircraft accident. After Congress created the U.S. Air Force as a separate service, the base continued its primary missions of training pilots and testing aircraft and armaments. In 1957 the Air Force combined the Air Proving Ground Command and the Air Force Armament Center to create the Air Proving Ground Center at the base, which led to the establishment of the Eglin Gulf Test Range. This allowed part of the airspace over the Gulf of Mexico to be used for safer testing of new air-delivered weapons than was possible with the older land based range. Eglin’s personnel continue to engage in state-of-the-art munitions and personnel training, expanding the combat support capabilities of the U.S. Air Force, the Department of Defense, the aerospace industry, and U.S. allies around the world.