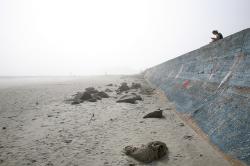 Galveston Island is a barrier island located two miles off the Texas coast. The island is about 3 miles wide at its widest and about 28 miles long. The Galveston Seawall extends over 10 miles along Galveston's oceanfront, protecting life and property against hurricanes and tropical storms.

The need for such a seawall became apparent when on September 8, 1900 a hurricane struck Galveston Island resulting in the greatest natural disaster in U.S. history. The storm killed, at a minimum, 6,000 of the island's 44,000 inhabitants and caused an estimated $30 million in damage. A three-member board of engineers [Henry Martyn Robert, Alfred Noble (President, ASCE 1903), and Henry Clay Ripley] was formed to make recommendations regarding protecting the city from overflows, raising the city above overflows, and building a seawall.

The board presented its report on January 25, 1902 and recommended construction of a curved-faced concrete seawall rising 17 feet above mean low tide and stretching over 3 miles in length along the oceanfront. In response to this recommendation, Galveston County, Texas contracted with J.M. O'Rourke and Company of Denver for construction of a 17,593-foot seawall. Built between 1902 and 1904, the seawall consisted of a curved, concrete gravity section 16 feet wide on the base at elevation 1 foot above mean low water, and 5 feet wide on top at elevation 17 feet above mean low water. It would weigh 40,000 pounds per foot of length. A 100-foot wide embankment was built up behind the concrete section to a maximum elevation of 16.6 feet. Over time the seawall was extended both westward and eastward to provide protection to other areas.

Concurrent with construction of the seawall, the city of Galveston undertook extensive grade raising which not only provided support for the seawall but also facilitated drainage and sewage systems. The initial grade raising took place from 1903-1911. Work was accomplished in quarter-mile-square sections and involved enclosing each section in a dike and then lifting all structures and utilities such as streetcar tracks, fireplugs, and water pipes. Around 2,000 buildings were raised on hand-turned jackscrews. The sand fill was dredged from the entrance to Galveston Harbor and then transported to the residential district through a 20-foot deep, 200-foot wide, and 2.5 mile long canal using four self-loading hopper dredges. After the fill was discharged in the areas to be raised, new foundations were constructed on top of it.