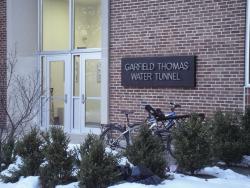 The Garfield Thomas Water Tunnel is a unique experimental facility for hydrodynamic research and testing. The 48-inch (1.2-meter) diameter water tunnel enables the research staff to conduct basic and applied investigations in the fields of cavitation, hydroacoustics, turbulence, transition, hydrodynamic drag, and hydraulic and subsonic turbomachinery. Instrumentation and testing methods have been developed to study noise, vibration, vehicle dynamics, and the interaction between the propulsor and vehicle body.

Built at the Pennsylvania State University in 1949 in cooperation with the United States Navy, the Garfield Thomas Water Tunnel was designed to determine the best hydrodynamic design of the combined torpedo shape and propeller to operate at high advance speeds with low cavitation. Subsequently, submarine hulls and propulsors were incorporated into the research. Over the years many new designs have been tested and developed for use by the Navy, including the pumpjet propulsor used on the Mk 48 and Mk 50 torpedoes.

A major overhaul of the main drive components was completed in 1988. The test console was given a major upgrade in 1988, including a new control panel and data acquisition system. The Garfield Water Tunnel, located at the Pennsylvania State University Applied Research Laboratory, is currently in operation and guided tours are available to the public.