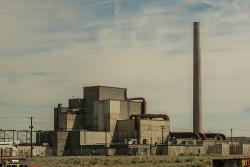 Located near the Columbia River, with a sure electric power source from the Bonneville and Coulee Dams, the Hanford B reactor was a graphite-moderated, water-cooled reactor, designed to operate at 250 million watts. It was loaded in September of 1944 under the personal charge of Enrico Fermi and went critical on September 26 that year.

During World War II, Hanford was the site for fuel fabrication plants and chemical separation facilities. B reactor plutonium was used in world's first nuclear explosion at the Trinity Test in Alamogordo, N.M., in 1945, and also in the bomb dropped on Nagasaki, Japan, August 9 of that year, prior to the end of World War II. B Reactor tritium was used in the world's first test detonation of a hydrogen bomb on Bikini Atoll in the South Pacific in 1952.

The plant was retired in 1968. Environmental restoration began in 1994 under the US Dept. of Energy-Richland Operations Office and managed by Bechtel Hanford Inc. for cleanup along the Columbia River corridor and on Hanford's Central Plateau.