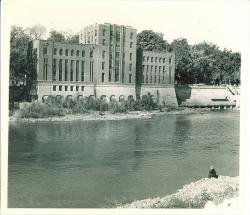 The Hydraulics Laboratory at The University of Iowa, renovated in 2001 and in 2003 renamed the C. Maxwell Stanley Hydraulics Laboratory, is the oldest university-based hydraulics laboratory in the U.S. that continuously has focused on research, education, and service in hydraulic engineering. Since its initial construction in 1919, the facility and staff have produced a massive amount of research that has shaped water-related constructs around the world. Its efforts have been guided by noted directors such as Floyd Nagler (1920-1933), Hunter Rouse (1944-1965), and John F. Kennedy (1966-1991). Students trained here have come from and practiced around the world. The building provides the home base for IIHR-Hydroscience & Engineering, formerly the Iowa Institute of Hydraulic Research.