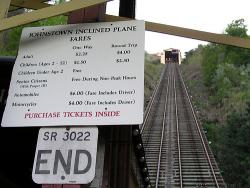 This is one of several, similar inclines built in western Pennsylvania during the late 19th century. It was designed by Samuel Diescher (1839-1915) after the great flood of 1889, to provide an efficient means of transportation between Westmont and the Conemaugh Valley. (See also the Monogahela and Duquesne Inclines in Pittsburgh.)

The Johnstown incline is among the world's steepest vehicular inclines, with a 71 percent grade. Its length is 896.5 feet, rising 502.5 feet. It was designed as a balanced incline with a double track and two cars. As one car goes up the incline, the other car heads down, assisted by a motor.
Each car is double decked, holding up to 15 tons. The two steel hoisting cables are about 1,075 feet long with a two-inch diameter. They are wrapped around a driving drum 16 feet in diameter and weighing three tons. The cables wind and unwind around the drum simultaneously. Each cable uses an air brake, in connection with a large dead-man emergency brake connected to the cables for safety. The original steam engine that powered the incline was replaced by a 400 HP electric motor.

The incline saved more than 4,000 lives in the flood of 1936, when victims escaped to the higher ground in Westmont. When another flood in 1977 washed out roads, supplies and workers were transported on the incline.

More than 60 original linen drawings of the incline were given to the Cambria County Transit Authority during its restoration in the 1970s.