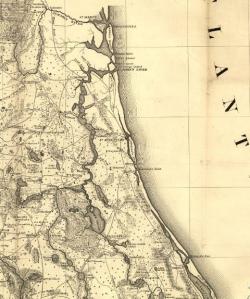 When Governor James Grant arrived in the newly acquired British colony of East Florida in 1764, he found it devoid of settlers. To increase both the population and commerce with the 13 colonies to the north, he commanded that a road be built from his provincial capital of St. Augustine to Ft. Barrington, Georgia.

From 1766 to 1775, a handful of early surveyors, engineers, and builders battled swamps, malarial mosquitoes, and roving bandits to construct the first graded road in the region. Up to 16 feet wide in places, traversing numerous rivers and streams, the 126-mile King's Road would serve as the area's primary artery for land communication until the 20th century.