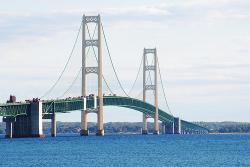 The Mackinac (pronounced "Mack-in-awe") Bridge (1957) spans the Straits of Mackinac between Lake Michigan and Lake Huron, connecting the Lower and Upper peninsulas of Michigan.   Prior to the construction of the bridge, a fleet of nine ferries would carry as many as 9,000 vehicles per day, with traffic backups stretching as long as 16 miles.

The design of the Mackinac Bridge was directly influenced by the lessons of the first Tacoma Narrows Bridge, which failed on November 7, 1940 due to instability under wind stresses. Three years after the Tacoma Narrows disaster, engineer David B. Steinman published a theoretical analysis of suspension-bridge stability problems. Among his recommendations were that future bridge designs include deep trusses to stiffen the bridge deck and an open-grid roadway to reduce its wind resistance.

In January 1953, Steinman was appointed as the design engineer for the Mackinac Bridge, and his recommendations were incorporated into its design.  Representing a new level of aerodynamic stability in suspension bridges for its time, the Mackinac Bridge was the first long-span suspension bridge to incorporate specific design features, including a porous deck, to manage the forces imposed on it by winds.  Construction of "Mighty Mac" took over three years in a demanding climate, and the structure's completion made all-weather travel between Michigan's two regions possible.

The bridge opened on November 1, 1957, according to schedule, despite the many hazards of marine construction in harsh weather over the turbulent Straits of Mackinac. The opening ended decades of the two peninsulas being solely linked by ferries. A year later, the five-mile bridge (including approaches) was formally dedicated as the world's longest suspension bridge between cable anchorages. By stating "between anchorages," the bridge could be considered longer than the Golden Gate Bridge, even though the Golden Gate Bridge's main span exceeds that of the Mackinac. At 8,614 feet (2,626 m), the Mackinac Bridge is still the longest suspension bridge between anchorages in the Western Hemisphere. The length of the bridge's main span is 3,800 feet (1,158 m), which makes it the third-longest suspension span in the United States, behind the Golden Gate and Verrazano-Narrows bridges, and twelfth longest worldwide.

The Mackinac Bridge was recognized as a National Historic Civil Engineering Landmark in 2009.