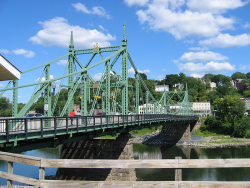 Combining aesthetics with economical design, the Northampton Street Bridge employs a cantilever design with overhead sway bracing confined to the pier elements, giving it the appearance of a small, graceful suspension bridge. Fine ornamental work and miniature turret finishings on the main verticals add to the bridge's elegant presence. Built for the Delaware Bridge Company and operated as a toll bridge, it was sold to the Delaware River Joint Bridge Commission in 1921 and has been toll-free to automobile traffic ever since.