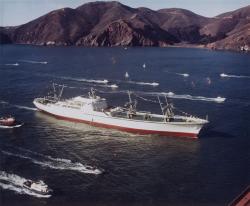 The N.S. Savannah was the first nuclear-powered cargo-passenger ship, built by the New York Shipbuilding Corporation at Camden, New Jersey. The 74 maximum-power thermal megawatt pressurized-water reactor was supplied by the Babcock & Wilcox Company. Nearly 600 feet long with 22,000-tons displacement, the ship at top speed surged along at 24 knots, with more than 22,300 shaft horsepower to a single propeller. A joint venture by the U.S. Maritime Administration and the Atomic Energy Commission to the design of George G. Sharp Inc. of New York, the ship demonstrated the technical feasibility of nuclear propulsion for merchant ships and was not expected to be commercially competitive. Traveling first to major U.S. ports, beginning in 1962, the Savannah made several global voyages. In the fall of 1971, the historic ship was retired.