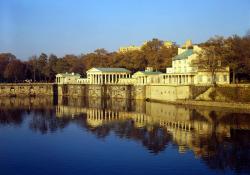 After an initial difficulty in attracting customers (who were used to getting their water from public pumps and private wells and cisterns), Philadelphia's waterworks soon couldn't keep up with demand. John Davis and Frederick Graff designed a complete remodeling of the system in 1811 so that it could supply the city's growing needs.

The decision to create the Philadelphia Municipal Water Supply was a direct response to several disastrous yellow fever epidemics that brought tragedy to the city in the 1790s. Philadelphia's wells were described as "extremely offensive and unwholesome" and were considered the source of the water supply's pollution. Still the capital at that time, Philadelphia was the nation's largest, most important city.

Engineer and architect Benjamin Latrobe moved to Philadelphia in 1799 to design the Bank of Pennsylvania, and he soon began to advocate a plan to solve the city's water problems. He proposed pumping water from the Schuylkill River into an adjacent settling basin and conveying it from there to Centre Square. Then the water would be pumped up 50 feet to two wooden tanks; these would provide the head to allow water to flow by gravity throughout the city in a system of distribution pipes. This plan was adopted and Philadelphia created one of the first major municipal waterworks to use steam-powered pumping methods.