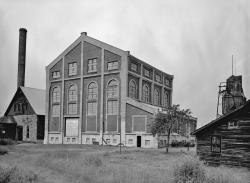 The largest mine hoist in the world, it serves the two incline skipways of Shaft No. 2, almost 9,300 feet long. The overhead winding drum has a diameter of 30 feet, of which the cylindrical center section is 10 feet long. The two 10-foot long end sections taper down to a 15-foot diameter. Wire hoisting ropes (almost 27 tons) could be wound onto a small end of the cylindrical drum as the other rope unwound from the cylindrical section.

Two cross-compound Corliss engines with cylinder bores of 32 and 60 inches and 66-inch stroke drove the drum directly. With steam at 160 pounds per square inch, 2,500 horsepower was developed at 34 revolutions per minute. Skips weighing 6 tons burdened with 10 tons of ore were brought up at speeds of up to 36 miles per hour. In its first year, the new hoist pulled larger loads, faster, saving Quincy $16,080 in fuel bills.