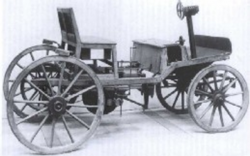 Siegfried Marcus (1833-1898), a remarkable engineer and manufacturer, lived most of his life and died in Vienna, leaving his most important legacy — an experimental automobile resembling today's modern car and the oldest extant automobile known worldwide. Marcus' second car, built circa 1875 (a more specific date still being investigated by historians), is believed to be the first vehicle powered by a four-cycle engine and the first to use gasoline as a fuel, featuring the first carburetor for a gasoline engine and the first magneto ignition. Marcus' second car, still operable, is now owned by the Austrian Automobile, Motorcycle and Touring Club in Vienna and now on display at the Vienna Technical Museum. The first car was not considered road-worthy and he dismantled it. A third and possibly a fourth car did not survive, making the second his only survivor. Described as "experimental," it never went into production, but it reportedly made a conspicuous appearance the streets of Vienna during its demonstration run.