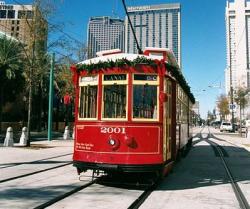 The St. Charles Avenue Streetcar Line is the oldest surviving interurban-urban passenger rail transportation system in the United States. Originally incorporated as the New Orleans Carrollton Rail Road in 1833, service began in 1835. A variety of motive power had been used including horses, mules, overhead cable, steam engines, and ammonia engines before electrification in 1893. The 900-series cars presently in service were designed and built by the Perley A. Thomas Car Company of High Point, North Carolina, in 1923 to 1924. They operate on the original fifteen-mile right-of-way with a 5-foot, 2 l/2-inch gage track that was adopted in 1929.