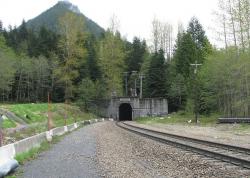 In the years following the Civil War, the land west of the Mississippi River was being settled and the Pacific Northwest explored. There remained, however, a large portion of Montana, Idaho, and Washington that contained enormous quantities of timber and minerals, but was not accessible by rail. By far the most grueling stretch was the Stevens Pass area in the Cascade Mountains.

John F. Stevens ,  Chief Engineer of the Great Northern Railroad and President of ASCE in 1927, located Stevens Pass in 1890 and oversaw subsequent railway development. In the first phase of construction, switchbacks were used to cross the mountains. Phase two consisted of construction of first Cascade Tunnel and switchbacks. In the third phase, Great Northern built a new 7.8-mile Cascade Tunnel which circumvented the first tunnel and switchbacks.