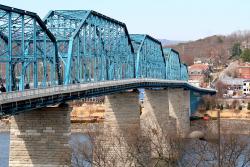 With 15 truss spans totaling 2,820 feet, the Walnut Street Bridge is the finest and largest surviving example of the standardized Phoenix wrought-iron truss bridges produced from 1884 to 1923.

Civil engineer Samuel Reeves founded the Phoenix Bridge Company. Wendell Bollman, inventor of the Bollman Truss, created the company's Phoenix column - a circular compression member assembled from flanged, rolled wrought-iron segments. The superstructures of these bridges were completely prefabricated of wrought iron in the company's plant at Elizabethtown, Pennsylvania, shipped to the site, and erected by local semi-skilled labor.

The Phoenix Bridge Company prided itself on its ability to deliver written estimates based on the answers to five questions regarding span, width, and clearance, and to deliver a finished product to the site. As such, the company was major force in the explosive expansion of the transportation infrastructure in the United States.