This is one of three nearly identical pumping stations that drained the Haarlemmermeer (Haarlem Lake), 1849- 52, then continued to maintain the polder's water table for more than 80 years. The Haarlemmermeer area covers 45,000 acres (about 70 square miles) in a triangular region between the cities of Amsterdam, Haarlem, and Leiden.

The Cruquius pumping station was instrumental in removing millions of gallons of water to reclaim valuable new land for farming, industry, and residences. Steam was chosen to power the pumps, when the traditional solution would have been windmills with Archimedean screw pumps. Designers Joseph Gibbs and Arthur Dean in London based the steam engine design on the mining engines at Cornwall, England, known as Cornish engines.

The Cornish pumping engine is a direct descendant of the Thomas Newcomen engine (introduced ca. 1715), which was improved by James Watt in 1769. Cornish engineers introduced higher steam pressures and a steam valve allowing expansive working. Of these engineers, James Sims designed a two-stage expansion engine, which is seen in the Cruquius design with further modifications.

The Cornish mine-pumping engine design is characterized by a beam pivoted on a massive all with the vertical steam cylinder under one end of the beam and the pump rod suspended from the other. Within a circular, castle- like tower, the eight protruding lift pumps were driven by a single central annular-compound steam engine with pistons of 7 foot (hp) and 12 foot (lp) and 10 foot stroke, working on the Cornish cycle at 5 strokes per minute. The pumps lifted 55,000 gallons a minute 15 feet. Pump buckets are suspended at the ends of the beams, lifting water from the polder level to a drainage canal. All pump buckets descend by their own weight and rise under steam pressure.

Cruquius was retired in 1932 with its original engine and pumps and preserved as a technical monument. The boilers were removed and the boiler house was made into a polder museum, visited by 30,000 annually. The other two stations, the Leeghwater and Lynden, were modernized over the years and are operating today.

The Cruquius engine was built by Harvey & Co. of Hayle, Cornwall, which was the largest manufacturer of engines in Cornwall. The pumps were furnished by Fox & Co., Falmouth, Cornwall, with the beams and boilers supplied by Van Vlissingen & Dudok van Heel, Amsterdam. The building architect was Jan Anne Beijerinck. 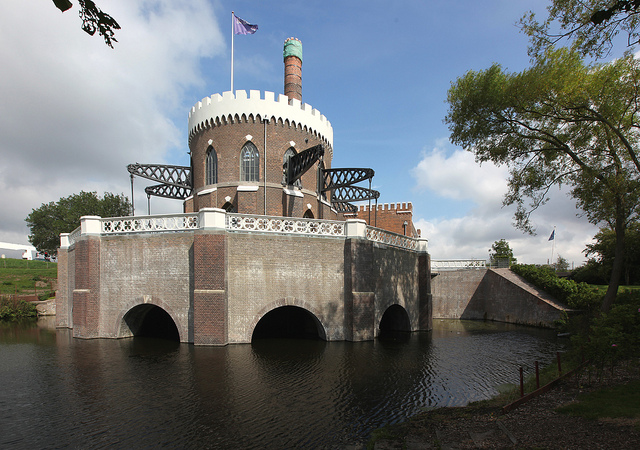