This dynamo, connected directly to a high-speed steam engine, was one of six that produced direct current at Thomas A. Edison's electric power station at 257 Pearl Street in New York City. The Pearl Street Station was the prototype for central station power generation. Edison set out in 1878 to provide an electrical distribution system to bring lighting into the home: His first filament lamp lit on October 21, 1879. With the help of Frances Upton and C.L. Clarke, Edison built his engine-driven dynamo for the 1881 Paris Electrical Exposition. And commercial operation of Pearl Street Station began on September 4, 1882.

When the plant was destroyed by fire in 1890, No. 9 was the only unit to escape destruction. It operated until 1893 when it was sent to the Columbia Exposition in Chicago. Since then, it has been rebuilt, re-exhibited, and retired several times. It was presented to the Ford Museum in 1930, where it is a partial replica and fully operational.

The Jumbo, named for its massive size after P.T. Barnum's elephant, signaled a major break with traditions in dispensing with ropes or belts to transmit power from the engine to the dynamo. Direct coupling of the two elements and high-rotative speed both reduced overall size and increased efficiency. The first electric bill was based on Edison's electrolytic meter. 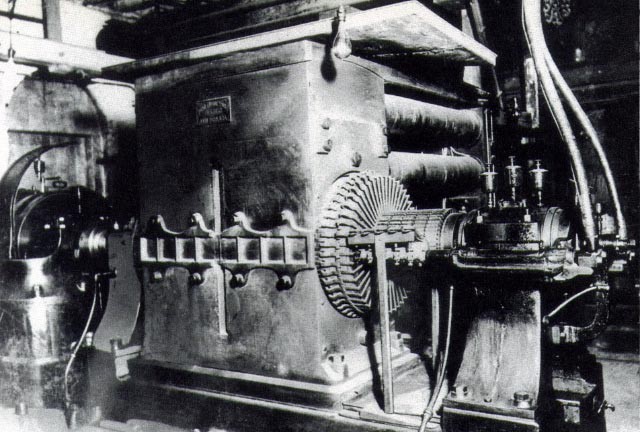