This machine, designed by Alton S. Newell, efficiently reduced automobile bodies into scrap metal for recycling. A body was fed into the shredder at a controlled rate, and rotating hammers, driven by a 500-hp motor, shredded it into small pieces that were easily shipped. The process took about 10 minutes a car and used less energy than other shredding and crushing machines.

A one-time junkyard manager, Newell learned how to scrap cars by hand (10 hours a car). By the late 1950s, he was operating scrap processing plants across the southeast United States. Remembering metal-can shredders and grain crushers for silo storage, he began to design the automobile shredder. The quality of the resulting material allowed him to market it to steel mills for reuse.

The system that he developed by 1965 avoided pollution caused by previous methods that burned nonmetallic parts to remove them from processing. It allowed the system to reject unshreadable scrap, had a smaller affordable motor, and discharged scrap in a way that eliminated the need for large, expensive foundations. His patent was granted in 1969. The second Newell shredder, called a 36104 top-discharge shredder, is the landmark now on display at the company's plant in San Antonio. 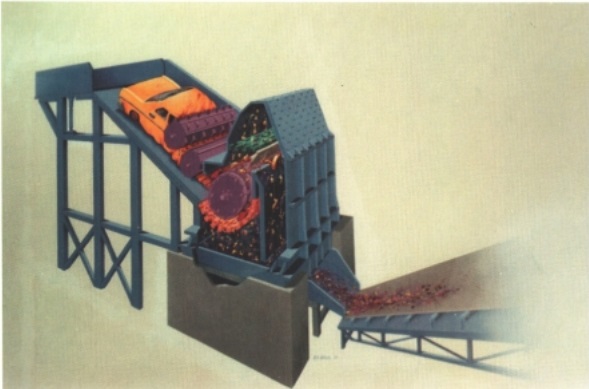