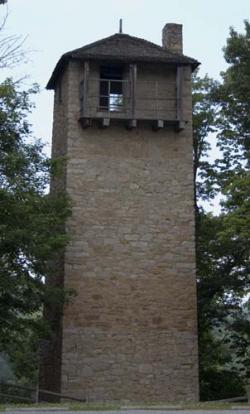 Society: ASMEMain Category: MechanicalSub Category: ManufacturingEra: 1800-1829DateCreated: 1807New River Trail State ParkAustinvilleState: VAZip: 24312Country: USAWebsite: http://www.asme.org/about-asme/history/landmarks/topics-m-z/manufacturing---1/-63-jackson-ferry-shot-tower-%281807%29Creator: Jackson, Thomas , Watts, William
This facility was typical of others in the country that made small spherical lead shot for the fowling pieces of frontier settlers. Smelted lead from the nearby Austinville mines was melted at the top of the tower and poured through a sizing sieve to produce small droplets. Surface tension caused the molted lead to assume a spherical shape that solidified during its 150-foot fall. The shot was then collected in a water-filled kettle at the bottom of the shaft. The "drop process" was patented in England in 1769 by William Watts, a craftsman of Bristol, England.
YearAdded:
1981
Image Credit: Courtesy Wikipedia/Dr00bie (CC BY-SA 3.0)Image Caption: Jackson Ferry Shot TowerEra_date_from: 1807
Eiffel Tower 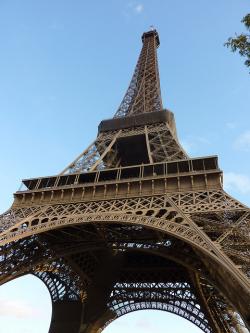 The Eiffel Tower was built for the International Exhibition of Paris of 1889 commemorating the centenary of the French Revolution. Of the 700 proposals submitted in a design competition, Gustave Eiffel's was unanimously chosen. At 300 meters and 7,000 tons, it was the world's tallest building until 1930.

The elevators ascend and descend within the curved legs of the tower, starting at an angle of 54 degrees from horizontal at the base and leveling out to 78 degrees at the top. The elevator cars are built with seatbacks that rotate to adjust to the varying angle.