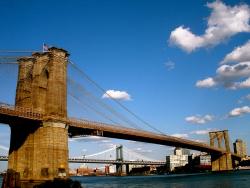 On May 24, 1883, with schools and businesses closed for the occasion, New York celebrated the opening of the Brooklyn Bridge. Also known as the Great East River Bridge, it was built over 14 years in the face of enormous difficulties. Deaths, fire in the Brooklyn caisson, and a scandal over inferior materials all added to the turmoil. The bridge is one of the most well-recognized symbols of American engineering, and remains the unofficial Eighth Wonder of the World.

John A. Roebling designed the bridge, but died before construction began. His son Washington Roebling was then appointed chief engineer, but became ill during construction; so his wife Emily Roebling took on some of his duties. It is possible the bridge would not have been completed without her meticulous efforts in inspection and management.