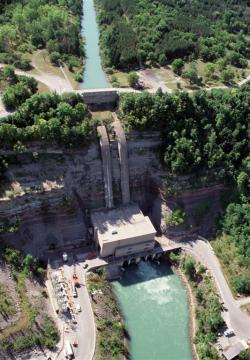 The Decew Falls Hydro-Electric Development was a pioneering project in the generation and transmission of electrical energy at higher voltages and at greater distances in Canada. On 25 August 1898 this station transmitted power at 22,500 Volts, 66 2/3 Hz, two-phase, a distance of 56 km to Hamilton, Ontario. Using the higher voltage permitted efficient transmission over that distance. The Cataract Power Company of Hamilton Limited (the predecessor to the Dominion Power and Transmission Company) was organized in 1896. The idea for the company came from John Patterson (one of the "Five Johns" to found the Cataract Power Company) who was developing the Hamilton Radial Electric Railway at the time. He wanted to supply his railway with water-generated electric power and selected De Cew falls as the place to do this. The water originated mostly from the Welland Canal and was used to supply St. Catharines. Before the project could commence, the waterworks commission of St. Catharines had to be consulted. Though they were initially supportive, in the end they refused to provide the necessary facilities. Subsequently, engineers were called on to devise a way to divert the water from the Welland Canal to a more suitable site. They recommended building a waterway to the escarpment bordering the canal channel. In 1897 the Cataract Power Company got a lease for water from the Welland Canal at Allanburg. A canal was constructed from Allanburg to an area near the falls which had recently been converted into an 800-acre storage dam. This in turn led to the power house at the head of the falls. Known as the "Power Glen" plant, it transmitted electricity along 34 miles of wire to the city of Hamilton.